It’s been a little while since I checked in with you folks to give a status update on A Dragon at the Gate. For those of you who’ve only come here for my Farscape rewatching or Percy Jackson reading, A Dragon at the Gate is the third and final book in my cyberpunk series known as The New Aeneid Cycle. Don’t let the “dragon” in the title fool you: this is sci-fi set in the mid-21st century.

The dragon may be a metaphor.
Or it may not be…

I’m a little past the point of 56,000 words written, and I think that might put me at about the halfway point. I’d originally thought I was more than halfway through, but now I’m starting to think that I may have underestimated the length of certain elements still to come. It’s difficult to be sure, however. A book in the process of being written is like a thing alive, and things never quite turn out the way I’d expect.

One example: I just finished a segment which I’d originally expected to take a single chapter, but wound up taking five to do properly. (That may come down in the editing process.) Pretty much every single plot thread converges at the book’s midpoint into a big ol’ crucible, and I vastly underestimated how much would really happen. Some characters didn’t make it through alive, either.

And if you’re wondering: at least one of those characters is a major character. And no, I won’t say who it is. (Though I did drop hints at my Third Place Books reading last night, so if you were there…no telling!) 😉 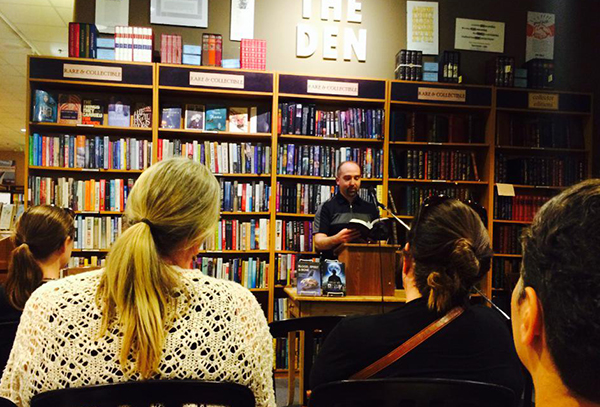 The great thing is that now that I’ve finished that particular crucible, I’m free to get to something I’ve been waiting to get to since A Shadow in the Flames. (Spoiler warning – skip to the next paragraph if you don’t want to know additional vague details about book 3!) The “Planners,” an element of the Paragon ship since the beginning, given that name in book 2, are finally going to come into play.

I’m still on track to have things ready for my publisher to get the book out in time for the holiday season. Wish me luck!