No one still really knows WHAT is in that ship.
That will change.

My writing on A Dragon at the Gate, the third and final book in The New Aeneid Cycle cyberpunk series, proceeds apace.

Wait, am I using that word correctly? *looks up “apace”* Hmm. “With speed?” “Quickly?” Let me start this over:

My writing on A Dragon at the Gate, the third and final book in The New Aeneid Cycle cyberpunk series, proceeds semi-apace!

I’ve never been what’s called a “fast” writer. Since I began writing ADATG in fall of 2013, I’ve had to battle less-pleasant distractions (a “day” job, moving, and a minor robot uprising that I’m sworn to secrecy about), more-pleasant distractions (Booktrope electing to publish Zeus Is Dead! Addictive computer games! Real human interaction!) plus my own methodical progress.

It’s gratifying when people ask me when book 3 will be out; that’s one of the things that keeps me motivated, in fact. So how far am I?

Well, give or take. I expect that’s about a third of the way through. Possibly two-fifths. This book keeps altering itself and my plans for it as I write it, so while I do have things outlined, it’s difficult to judge a final length just yet. Today, I wanted to share a little of some of the characters you’ll be either reunited with or meet for the first time in A Dragon at the Gate. Be warned, this list will imply some spoilers from earlier books by virtue of being or not being included. Characters do die in this series. Then again, some characters simply leave the narrative, so you can’t really be sure of anything without reading, can you?

Characters Who Will Return: 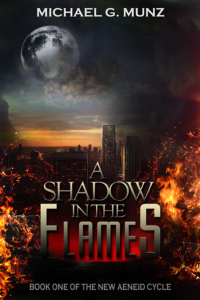 Book One: Grab the new Booktrope edition in ebook or paperback! 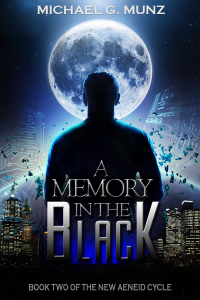 Book Two gets its Booktrope re-release in March 2015!

So hopefully that’s enough to whet the appetites of those who’ve read the first two books. (And if you haven’t, what are you waiting for?) Booktrope is still planning to release book three this fall, so I’d better get back to writing it.

I’ll leave you with an excerpt and a quote from A Dragon at the Gate. Thanks for reading, and enjoy!

The elevator was out of order. Michael climbed the stairs with Jade at his heels.
“That elevator broken a lot?”
“Not that I’ve ever seen, but I don’t live here.”
“Uh huh.”
As they reached the door to Marc’s unit, Michael noticed she had an auto-pistol in her hand. He knocked on Marc’s door.
There was no answer, but nor had he expected one. He moved to swipe the keycard. Jade grabbed his wrist.
“Hang on.” Without further explanation, she pressed her left palm against the door, fingers splayed. Tiny lights beneath her skin flashed a path from the back of her hand to her fingertips and then back. She withdrew her hand. “No one immediately inside, at least.”
“How’s that work?” he asked.
“Science. Though the lights just make it look good.”
“Handy trick.”
“Ooh, someone’s clever.”
Michael realized the pun. “Er, unintended.”
“Didn’t say it was you.” She smirked. “C’mon. Inside.”

“Someone is sabotaging ESA facilities, destroying two in as many weeks. Both were observation stations capable of monitoring the lunar surface. They do not know who is responsible. Nor do we.”