Presenting Chapter One of Zeus Is Dead: A Monstrously Inconvenient Adventure! 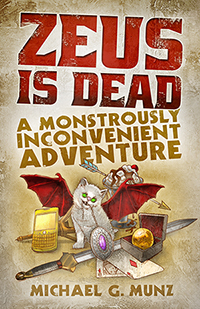 Grab it now on Amazon, Barnes & Noble, iTunes, and elsewhere!

“The question of who killed Zeus is unimportant. Trouble neither us nor yourselves further with this. It is only for you to know that the gods of Olympus have returned.”

“Though none of them ever went into details publicly, it seems clear that the Olympian gods’ return was sparked by whatever happened to Zeus.”
—excerpt from The Gods Are Back and How It Affects Your 401(k)

Zeus watched his child stumble through a rain-drenched wilderness, the victim of a mudslide that had lamed an ankle and snatched a pack containing food, water, and a spectacularly nifty smartphone. The child winced with every step back to the trail, but did not stop. The king of the gods swelled with pride at his offspring’s courage even as his immortal heart broke: no aid could he ever give.

Long ago, it would have been simple for him to help. He could have stopped the rain, ordered Artemis to lead the child to safety, or even dispatched a full squadron of rescue helicopters. (Okay, so helicopters weren’t an option 3,000 years ago—save once, and that was a very special case—but he had used the other options a dozen times over.) Now, he could not risk even dropping a granola bar into the child’s pocket as encouragement.

That Zeus could blame no one but himself for his inability to act only deepened his heartbreak. His own decree had forced the gods to withdraw from mortal affairs many centuries ago. He’d never told the others why, never shared the prophetic vision that led him to believe the Withdrawal necessary. There was no need; he was their king, and the vision contained knowledge he preferred to keep secret. They would obey his commands or suffer the consequences.

Yet standing idle while his mortal progeny suffered was one of the things Zeus hated most about the Withdrawal. There was also the greater discretion now required in siring those progeny, but that was more easily managed. The lack of mortal worship via temples and sacrificed bulls wasn’t terribly wonderful either. His mouth still watered at the thought of a burger made from sacrifice-beef.

In truth, the danger that his child would fail to make it to safety was not a major concern for the king of the gods. His mortal children were always exceptionally capable. Perseus slew Medusa when he was younger than this one, albeit with a few gifts from Zeus to help him along. On the plus side, the forests were long cleansed of hideous, snake-haired women of Medusa’s ilk, and his Withdrawal decree prohibited any Olympian from loosing any more of them upon the world. Even so, he longed to reach down and lift his child to safety.

And replace the smartphone, of course. Really, who liked losing their smartphone?

With a grumble, Zeus turned off the 200-inch plasma screen Hephaestus had built him for such viewings. As long as the danger to Zeus’s own immortal life was mounting, voyeurism was an indulgence. It was ironic: the child was a result of indulgence (and his love of redheads), and yet that same child was his ace in the hole.

If he needed it.

If he had time to prepare.

If he was even right that a threat existed, really.

Lacking omniscience, Zeus couldn’t be sure. If there was still a threat, then his attempt to prevent it with the Withdrawal had failed—which meant he’d misunderstood the original prophecy and could reach down right now, save the child, and deal with things in proper fashion. Yet if there was no threat, to lift the veil of discretion that hid the gods would surely bring doom of a different nature upon him.

Thrice-damned prophecies! They were twisty buggers. More often than not, a prophecy didn’t help you escape trouble, it just stressed you out while you failed to do so. Then before you knew what happened, you’d killed your father, married your mother, or been deposed by a son you thought you’d properly eaten already.

Zeus grinned despite himself, thankful he’d been on the winning side of that last one.

For the hundredth time he considered consulting Apollo. Though Zeus would never admit it to the other gods, Apollo was far better at the prophecy thing than he. Perhaps it was no true shame. Apollo was his own divine son; would his glories not reflect upon Zeus as well? Yet consultation required trust, especially with enemies likely lurking. Zeus was unwilling to share his suspicions with anyone until he was certain about his foes.

“Enter, child,” he called. He turned toward the door and masked his worry to appear, he hoped, stronger than he truly was of late.

The door swept aside at Zeus’s will, and Aphrodite stepped in. He was unable to keep from smiling at the sight of her. In her hands she held a small, wrapped box. “A gift, Daughter?”

He smirked at the lurking falsehood in her tone, eyes narrowing in amusement. “From you, Aphrodite?”

“You sought to take the credit as your own?”

She blushed. “Oh, come now, Daddy. Is it not wonderful to see me as always? What better bow on a gift than for your favorite child to deliver it?” She flashed a dazzling smile that weakened under Zeus’s scrutiny. She pitched the detached tag onto the table. “All right, so Athena left it.”

Zeus’s smirk turned to laughter despite his troubles. “Aphrodite, goddess of love and beauty, though it’s true I love you highest of all, you must work on your honesty.”

“Not war? That is how the saying goes, I believe.”

She rolled her eyes. “Not today. Ares and I are fighting.”

Zeus frowned. That she was embroiled in a millennia-long extra-marital affair with the god of war didn’t mean she had to mention it so boldly to the father who’d betrothed her to another. “Ares is always fighting. And you should be faithful to your husband, Daughter.”

“Not to hear Hera tell it.”

Zeus groaned. He had enough troubles without thinking of Hera. Aphrodite changed the subject.

“Besides, somebody has to pay attention to Ares. All the other gods are cranky with him for all the glory he gets from the mortals’ wars.”

“This again? Have you come to visit only to press your king again on an old decision?”

“At least allow the monsters back, Daddy. There are so few opportunities for mortal glory that don’t involve fighting wars. Grant them a few creatures? Where’s the harm in that?”

“Few opportunities? Are you not still goddess of love?”

“Yes, yes, sexual conquest, romance’s triumphs and all that. But oh, it’s so much hotter when the man has just driven his sword through some fearsome beast!”

“Daddy, that was Dionysus.” She pouted. “Can’t you keep that straight?”

“I only tease, Daughter.”

Aphrodite flashed one of her haughtiest looks and turned with a huff toward the door. “Fine! Open your gift by yourself, then! It’s probably just another stupid lightning bolt cozy anyway!”

And with that, she was gone.

One nice thing about not being able to contact your mortal children, Zeus supposed, was that they couldn’t act like brats to your face.

He glanced at Athena’s gift and decided to let it be until he had finished his preparations. He was nearly done making that loathsome amulet, yet there were still instructions to impart, lawyers to call, contingencies to set up. All of that was preamble before he tackled the real problem of finding out just who had stolen the god-killer.

Zeus picked up the amulet. Its central purple sapphire glinted amid its gold setting. Not for the first time, he questioned his decision to create it, this talisman that sapped his strength and wits, before taking care of the other details. Yes, it was necessary, but should he have waited? Yet what good were instructions without the amulet?

Gah! Had creating it drained him of his confidence as well? By the Styx, someone would get a lightning bolt where the sun didn’t shine if crafting the amulet had actually rendered him impotent.

It occurred to him that Athena, though charged to protect him, might be duped into sending a gift that would attract his attention. Perhaps someone planned to attack from outside when he was distracted with opening it! Still holding the amulet, Zeus rushed to the window and looked out. Even searching for the telltale signs of an invisible assailant, he saw only sky.

The peculiar thing about gods—or one of many peculiar things, really—is that they’re just as prone to stupidity as mortals, if not more so. Ego gets in the way of clear thought at times. In fact, only after Zeus felt the immortal-killing sting on his suddenly no-longer-immortal backside and tumbled out the window down the slopes of mighty Olympus did it occur to him that perhaps Athena hadn’t sent the gift at all.

It also occurred to him that he had very little time to make an impossibly accurate throw. Three seconds later, things stopped occurring to him entirely.

Fortunately for the rest of this story, plenty of other things occurred afterward to lots of other people. Some of them involved cellular phones. Gold ones, even.

And savage man-eating kittens, but let’s not get ahead of ourselves.

The gods are back. Did you myth them?

A comedic contemporary fantasy set in a version of our world where reality TV heroes slay actual monsters and the gods have their own Twitter feeds!