Do you want fudge? Because this is how you get fudge.

Chocolate-peanut butter fudge, to be precise.

I’m going to break from my blog’s usual format (such as it is – perhaps I should’ve put quotation marks around that word) and give you all a quick crash course in how to make some pretty decent fudge. Those of you who dislike fudge may move along.

Okay, now that that guy is gone, well, here we go! 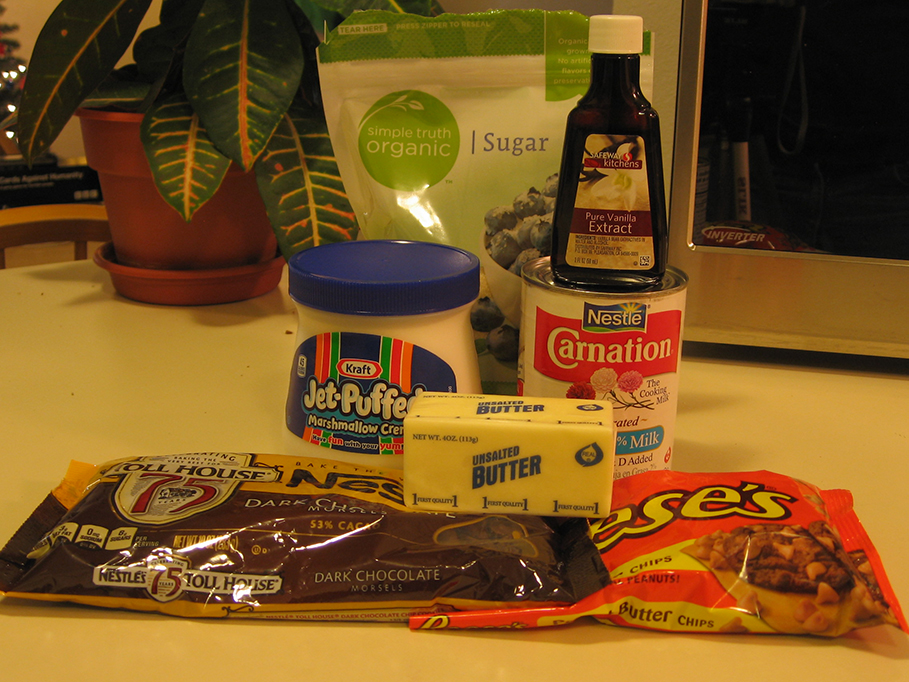 So first, get all of this stuff! (The plant is optional.) You’re looking at sugar, unsalted butter, marshmallow creme, vanilla, dark chocolate chips, and peanut butter chips. Oh! And evaporated milk. That stuff disturbs me, frankly, but it’s important. You try to make fudge without evaporated milk, and you’ll get…um… Well, probably a different sort of fudge, I suppose, but…
Be sure to test the chocolate and peanut butter chips. Sample a few. Possibly eat a whole bag. You want to be sure only the best goes into your fudge, after all.
Also optional: Cards Against Humanity in the background on the left. 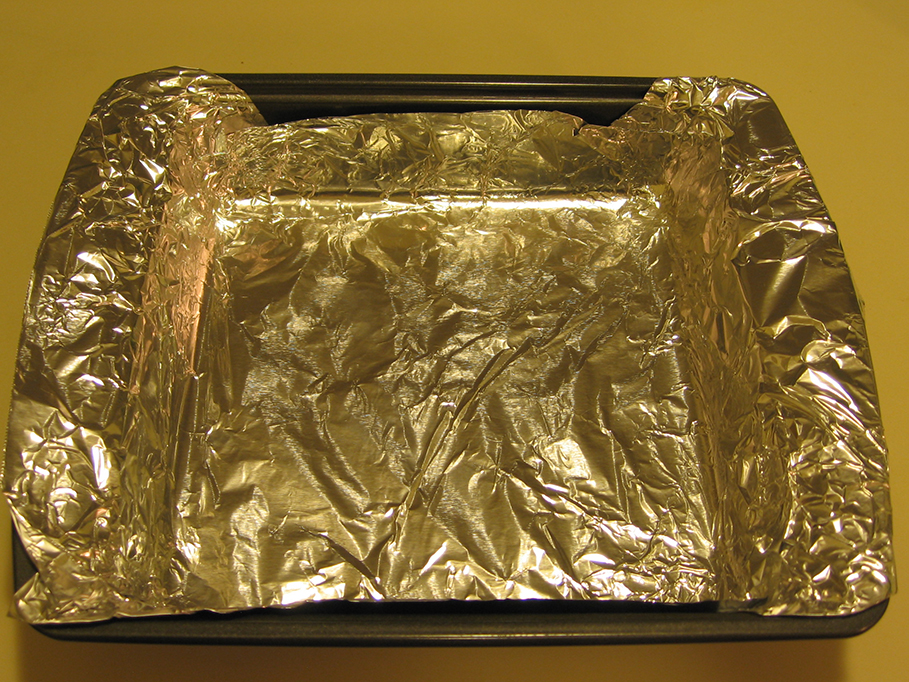 See, I always forget this part, and then later I wind up with a vat of hot proto-fudge and nowhere to put it. So do this now. Be sure to get the foil as flat as you can against the surface. You don’t want a lot of crinkles or you’ll wind up with little foil bits in your fudge when you eventually take it out of there. While this may give your fudge a bit of a mineral kick, it’s probably not what you want. 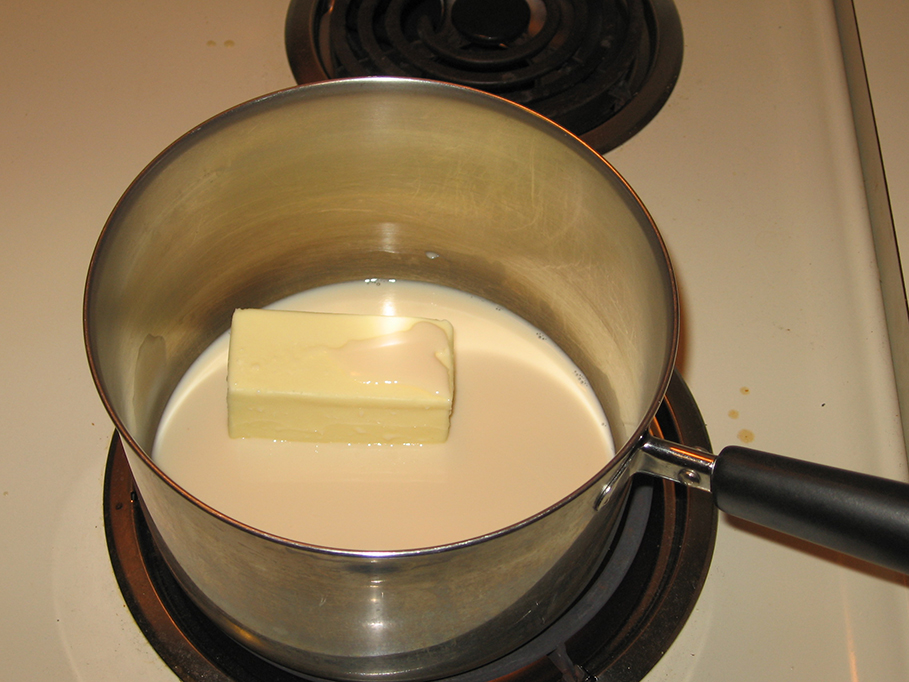 That’s half a cup of butter (also known as one stick, if you’re in the U.S., and possibly elsewhere, I’m not sure – please forgive the cultural insensitivity of these directions) and 10 ounces of evaporated milk.
Why is the evaporated milk slightly brownish? I have no frelling idea. No one knows. That’s just how that stuff comes out of the can, and frankly I think the less we know about this, the better. Rule #1 of evaporated milk color: DO NOT TALK ABOUT EVAPORATED MILK COLOR!
Oh, and turn the burner onto low to start the butter melting.

Grab your jar of concentrated Gozer-flesh! 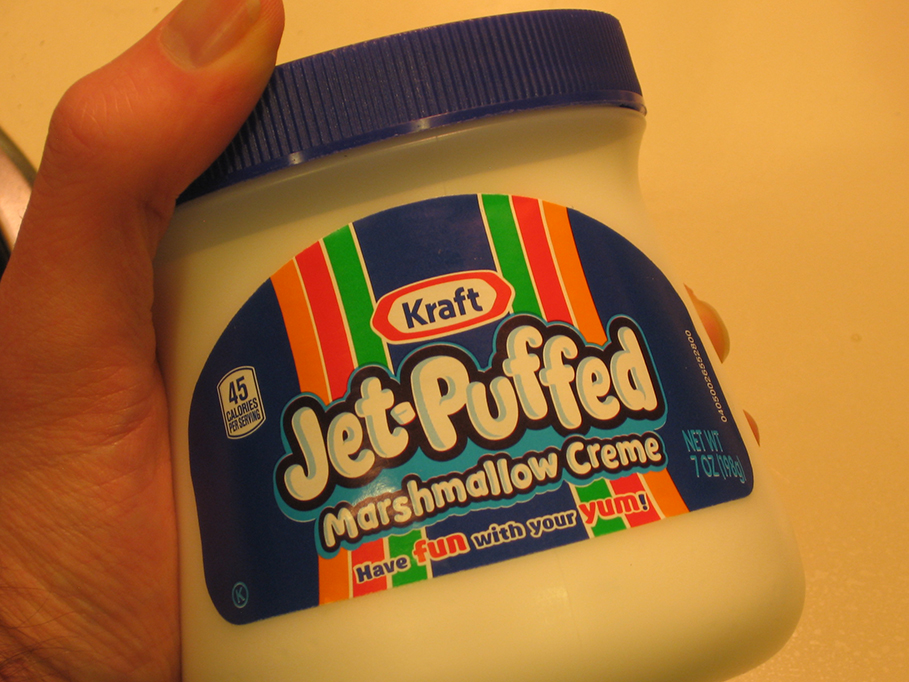 That’s a Ghostbusters reference, folks. If you haven’t seen Ghostbusters, GO WATCH IT. NOW. Those who have not seen Ghostbusters do not deserve fudge.
So that’s 7 ounces. Brand doesn’t matter. This stuff gives me the creeps, too. I don’t normally like marshmallows unless they’re properly toasted, but this junk is vital here. Scoop out the whole damn jar and put it into the pot.
…Put the marshmallow stuff into the pot, I mean. Throw the jar away. 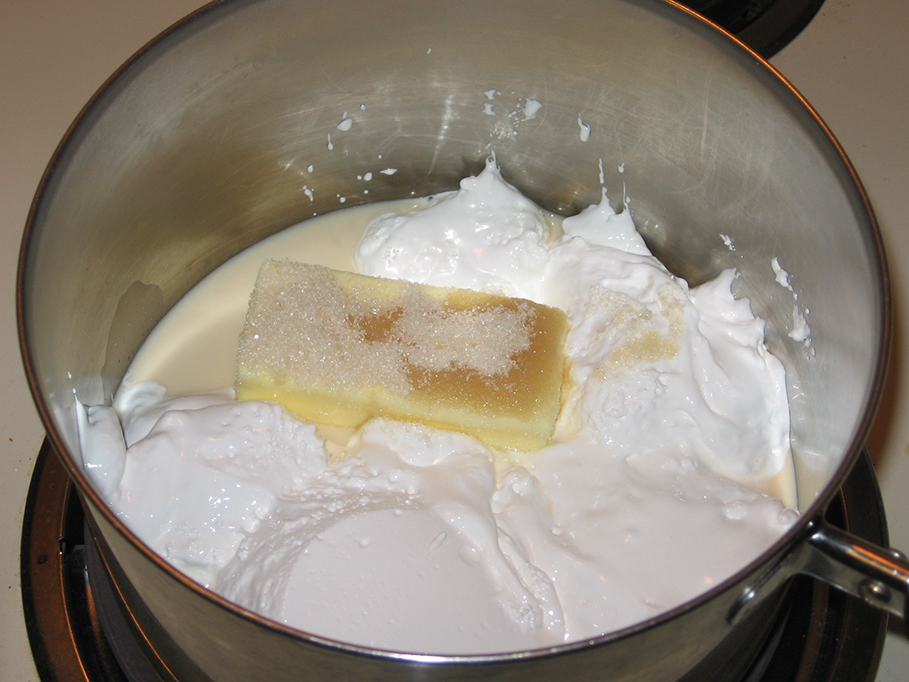 Toss in a cup and a half of sugar, then start stirring it around with a rubber spatula or something. You could use your hand, I suppose, but then you’d get your hand all sticky and eventually get 2nd degree burns or something when it heated up, so that’d be a dumb idea that only an idiot would try.
Take my word for it, it hurts.
…Shut up. 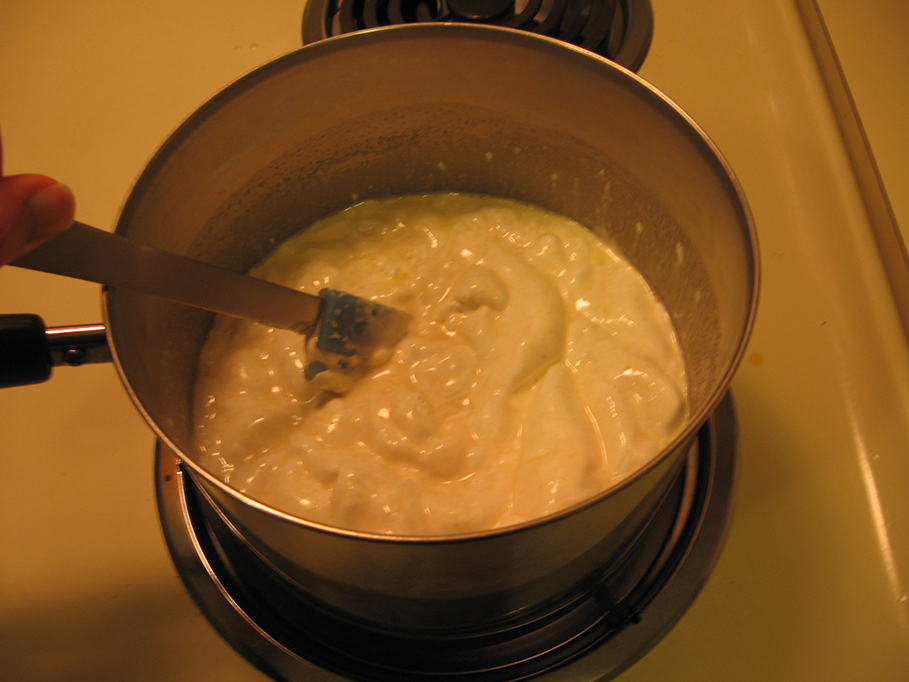 After things start to melt a bit, turn up the heat on the burner to medium. Keep stirring, being sure to scrape the sides now and again. Also sweep the spatula across the bottom of the pot sometimes to keep things from burning down there in the depths.
Make sure you don’t have to go to the bathroom or anything, because you’re going to be here for a bit. Do NOT leave this stuff unattended, or it’ll burn, and then you’ll be a terrible neglectful person with no fudge. 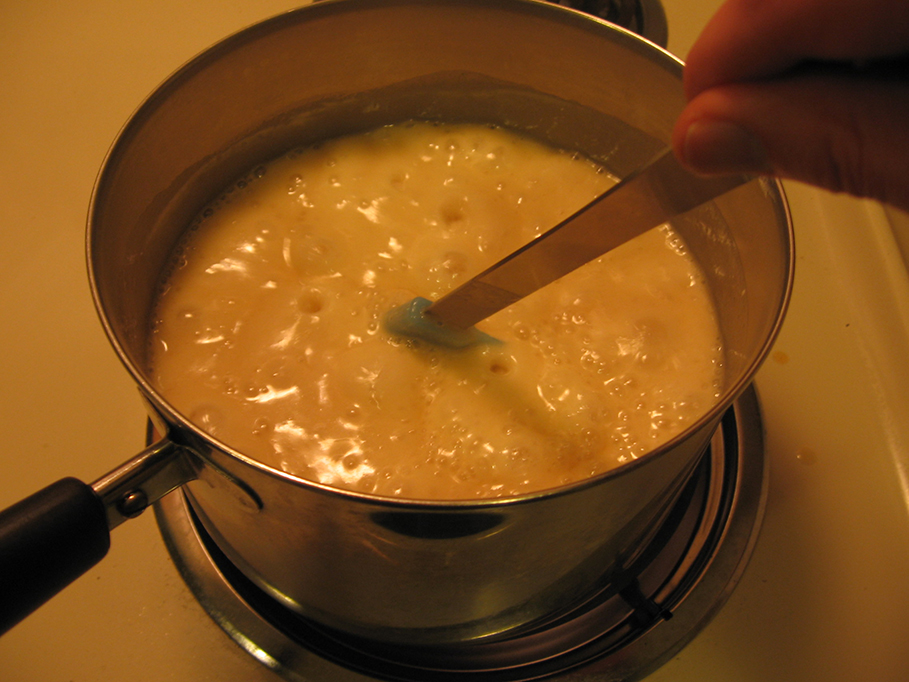 What you’ve got now is scientifically referred to as “quasi-fudge.” (Or it would be if I could get those damned peer-reviewed fudge journals to accept my papers, damn it!)
Once it starts boiling, lower the heat down to medium-low, and keep stirring for five minutes. It should stay at a slow boil during that time. Watch your fingers, because if it’s boiling too fast it’ll splurt up at you. That’s not fun. That hurts.
Remember: Stir constantly! This is where all your training kicks in! You do not leave that stove! If there’s a phone call, if something cool is on TV, if you get an idea for an awesome sci-fi novel concept that you feel you just have to work on right that minute, I don’t care! We’ve got FUDGE at stake here, people!
NOTHING must distract you! Because when the day comes that 40 rhesus monkeys escape from the research facility down the road and burst into your kitchen demanding bananas that they won’t even use for scale–and make no mistake, that day WILL come–you’ve got to be ready to stand there and attend to your fudge even in the midst of that rabid storm of monkey-hate!

Boiled it five minutes? Good! Now take that sucker off the heat and grab yer chips!

You’re going to want 1 and a half cups of dark chocolate chips and 1 and a half cups of the peanut-butter chips. You can get by with 1 cup of peanut-butter chips and 2 cups chocolate if you have to. You can also replace some of the chips with actual peanut butter, but not too much or the fudge won’t be quite as creamy.
Anyway, dump the chips–along with a teaspoon of vanilla–into the pot and stir until it’s all melted and uniform.
Oh, and be sure to use REAL vanilla extract. None of that imitation crap. This is fudge. These are the big leagues. Man-up and do what it takes to make it good. Or woman-up. Or whatever-gender-you-identify-with-up. Just get the real stuff.
Now you’ve got “proto-fudge.”

Remember that pan with the foil? Grab it. 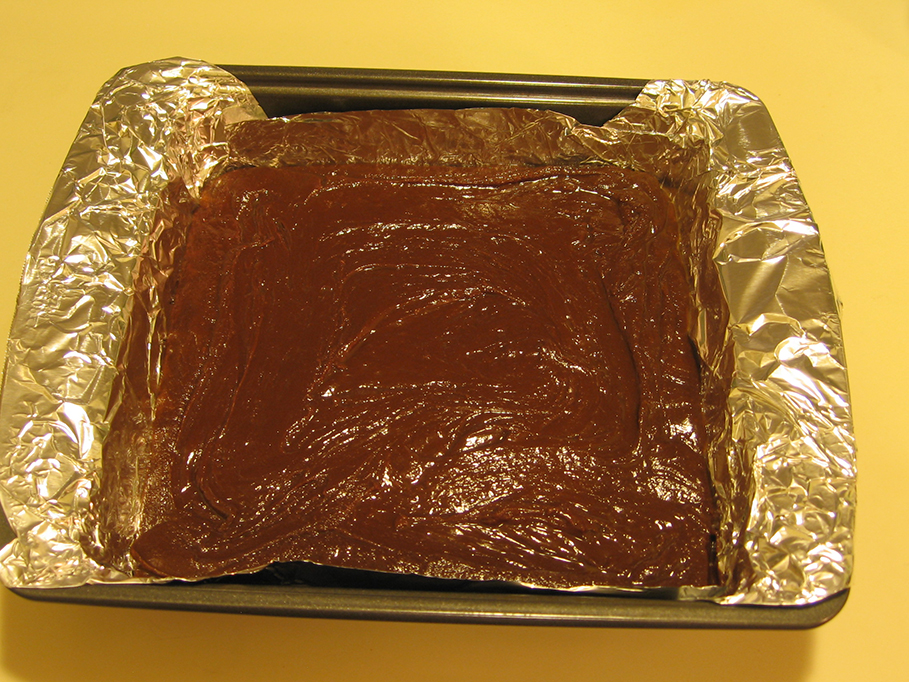 Resist the urge to just eat the proto-fudge with a big ol’ spoon. For one thing, this isn’t even it’s final form! It’ll taste better when it’s solidified and cooled. For another thing, this stuff is still hot and you’ll burn your face off. Probably. I’ve never tried it, to be honest. I could be entirely wrong here.

Cover it with a paper towel and shove it into your fridge. 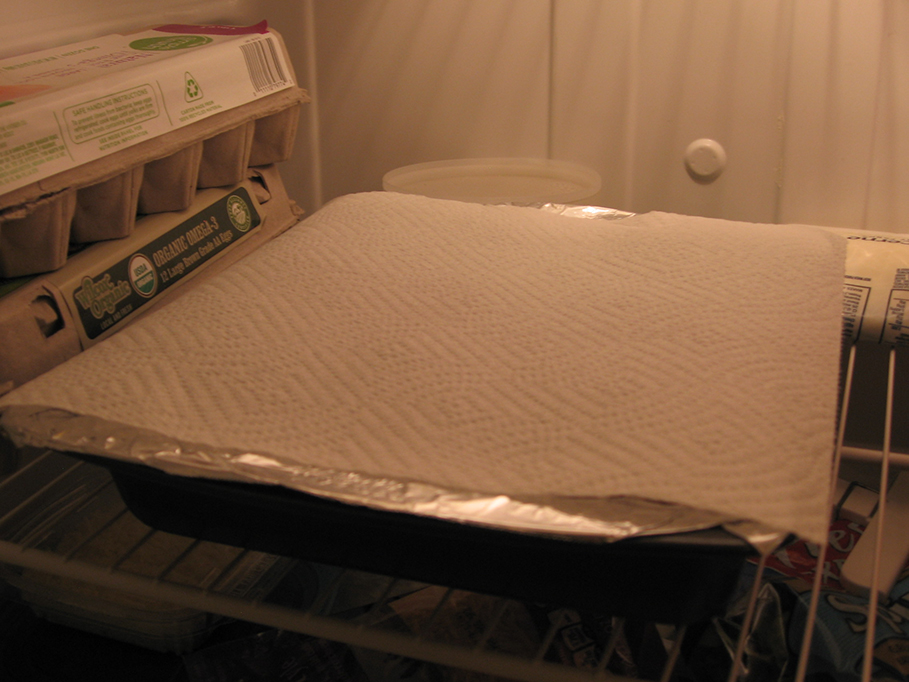 The paper towel may not be necessary, strictly speaking, but you don’t want weird refrigerator-crap sprinkling down into your proto-fudge. Mystery sprinkles ruin fudge, and ruining fudge means wasting chocolate.
YOU DO NOT WASTE CHOCOLATE. 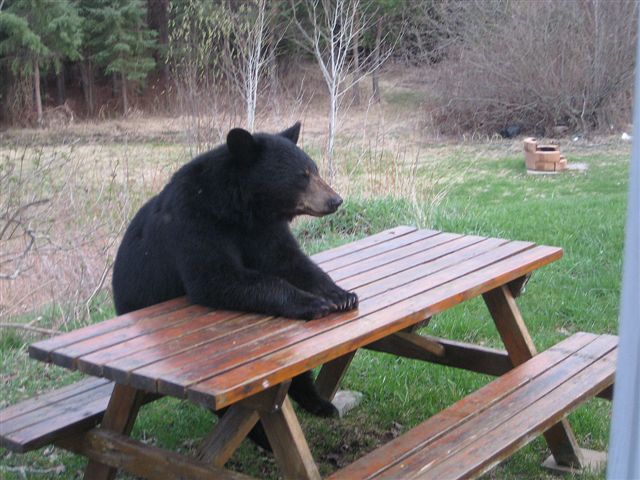 It’s chocolately, peanut-buttery, and gooey, and you can’t have it! Not yet. Let it sit in the fridge overnight. Try not to think about it being in there. Waiting for you. Calling for you… 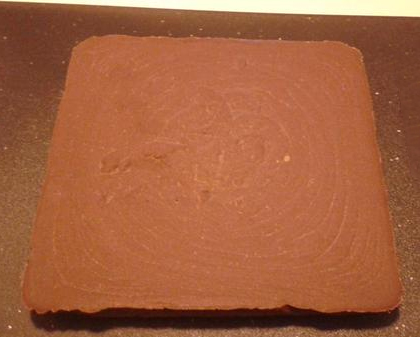 Take the pan out, dip the bottom of the pan for about 30 seconds in warm water to make the fudge a little easier to get out of the foil. (Don’t spill any water ON the fudge, though.) Then lift the foil out of the pan. Carefully peel off the foil and put that block of fudge on a cutting board.
Now, technically, at this point you COULD just take the whole thing to the table and devour it yourself. No one’s going to judge you. Well, I won’t judge you, anyway.
OR, you can dice that stuff up into more manageable chunks.

A pizza bat’leth (a.k.a. pizza scythe) I highly recommend these things. 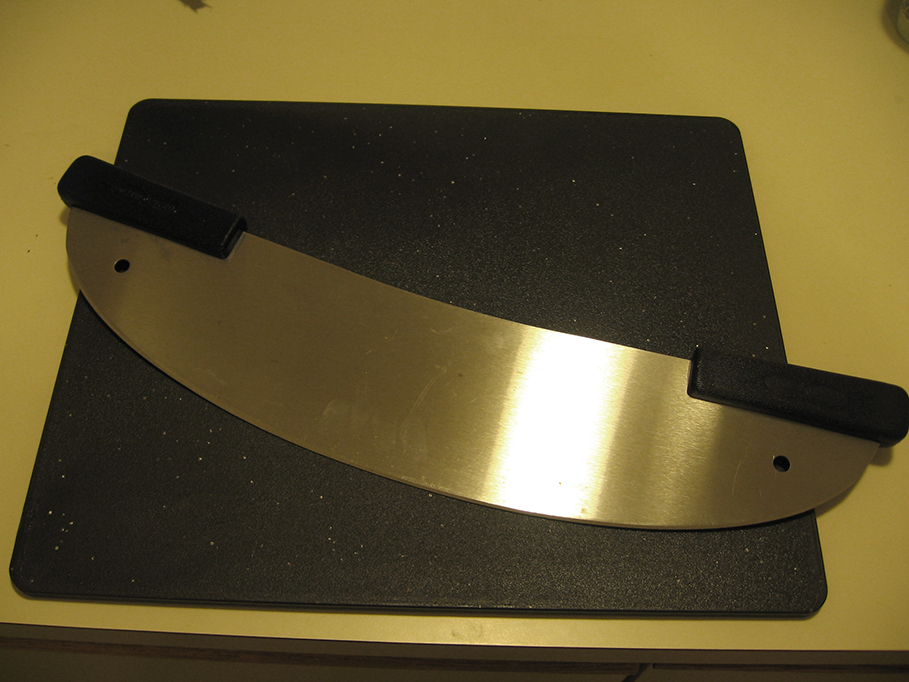 For one thing, they’re awesome for cutting pizza, and ideal for home defense. (That wicked bastard is about two feet long.) But you can also use it to dice your fudge in far less time than you’d be able to do with a knife or even a rolling pizza cutter.
If you don’t have one, you’ll just have to do it the hard way. Good luck with that. 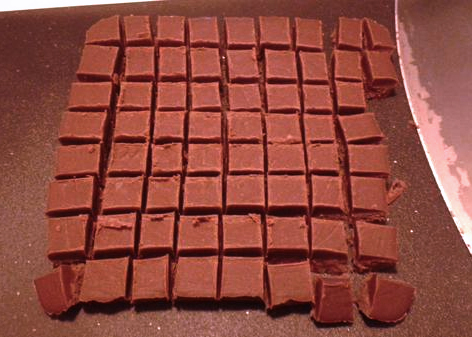 Make ’em whatever size you want. Heck, you could just cut ’em into long sticks, or get a cookie cutter, or, I dunno, make individual shapes that you can use to build a little fudge house or something. Have fun.
Oh! This is vital: Be SURE to eat a few pieces at this stage. Quality control is very important here, especially if you’re going to be sharing it with loved ones. Do you want to give them substandard fudge? No, of course you don’t. Try as many pieces as it takes to be sure. Sometimes it’s just not good enough for other people to have, and you have to eat it all and make a new batch.
These are the sacrifices we who bear the fudge must make, people.

NOW YOU HAVE FUDGE! 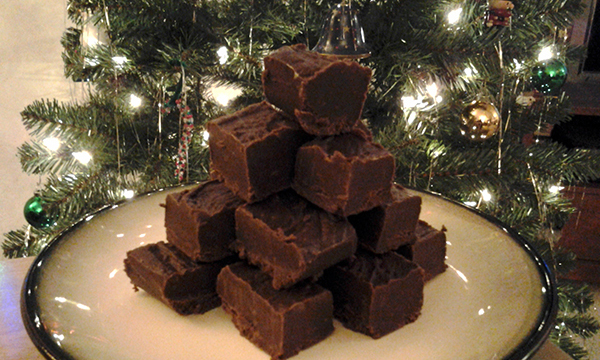 You can have it sitting out if you want to make a plate of it for company or something, but when it’s not being eaten it’s best kept chilled in the fridge.

Thank you for joining me in this alternative-style post. As an additional reward for your patience, here is a cat looking cuter than all of us put together. 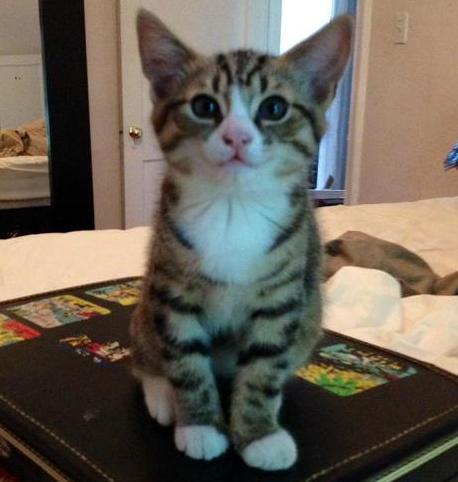 It’s not my cat. Cats are against my lease. But it’s okay, because I have fudge.
And now, so do you.