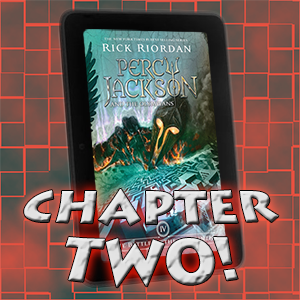 Maybe if Grover spent more time searching and less time dating, he wouldn’t be in this mess…

A return to camp, much mysterious mysteriousizing, and Grover’s dating a dryad. All this as I read chapter two in Michael Reads Percy Jackson: The Battle of the Labyrinth, a.k.a…

The Underworld Sends Me a Prank Call

While this chapter is heavy on the set-up, it’s still a fun return to camp. Getting a glimpse of the normal camp activities is a good way to ground us a bit and just re-introduce the world again to the reader. Camp Halfblood really does seem like a fun place–I mean, aside from the potential monster-death and kitchen clean-up duty.

Plus it’s just fun to see Tyson again. Back in book one, Grover was my favorite character, but Tyson has passed him up by now. He’s just fun to have around, and I’m hoping he’ll be around for more of this book than he was in the last book. I feel a little bad for him having to clean up Percy’s mess, of course…

Speaking of characters I like, I don’t know much about the new sword instructor Quintus, but I like him so far! He’s got a good halfblood mentor vibe, and he feels different from Chiron. I like them both, but if Chiron’s the father, than Quintus is the cool uncle. …He’s going to betray everyone, isn’t he? (I don’t really suspect that, yet, but I’ve gotten paranoid.)

Another thing this chapter does is revel in its own mystery, introducing things that seem to have giant neon signs exclaiming: THIS WILL BE IMPORTANT LATER! Primarily, it’s to do with Quintus (Chiron knows things about him that he doesn’t understand, and there’s the mysterious scar), and with what Annabeth and Clarisse have been working on together. The latter seems to have something to do with Grover’s options as well.

The Quintus stuff didn’t bother me, but the Annabeth/Clarisse thing seemed a little too blatant in terms of keeping things artificially mysterious just to lure the reader onward. Case in point:

“What’s this ‘other way’?” I asked Annabeth. “The thing Clarisse mentioned?”
She picked up a stone and skipped it across the lake. “Something Clarisse scouted out. I helped her a little this spring. But it would be dangerous. Especially for Grover.”

Then Percy gets distracted for a sentence or two by something Tyson says about being nervous around Grover, and completely forgets (literally less than a minute later) to follow up and ask more about what the “other way” is—something Percy would be curious about. Riordan, please: Stop doing this. Especially multiple times per chapter on the same topic? Please? 🙂

I do like how the glimpse of Nico was handled, though. And wow, the poor kid’s not doing nearly so well, is he? Who’s that ghost he’s talking to? What’s this maze (labyrinth!) he went through? The questions are all introduced and it makes sense that we have to wait to find out because we, like Percy, are only able to listen in, with no ability to ask questions.

Whatever’s going on there, Nico’s been leveling up. And it seems his sister Bianca really is dead. …And yet, stubborn fool that I am, I’m still not convinced she’s dead! Nico can’t summon her ghost, and he’s a son of Hades. Perhaps the only evidence he has that she’s dead is from what the ghost who calls him “master” tells him, in which case that might very well be a trick to manipulate Nico, right? Right?

One thing I’m confused on, and go ahead and answer this for me, since it’s a question about the last book…

Now, as far as I knew, he was still sailing around on his demon-infested cruise ship while his chopped-up Lord Kronos re-formed, bit by bit, in a golden sarcophagus, biding his time until he had enough power to challenge the Olympian gods.

Wasn’t it decided at the end of The Titan’s Curse that Poseidon would be allowed to take off the gloves and sink the Princess Andromeda, the aforementioned demon-infested cruise ship? Or am I remembering wrong?

Despite my criticisms, I’m liking the book so far, and eager to see where it goes. On to Chapter Three!