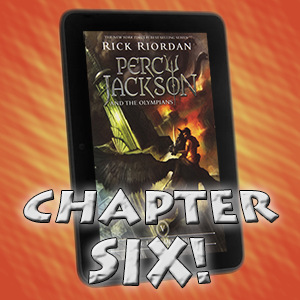 Alternate chapter title: Home Is Where the Hellhound Is

You can’t go home again. But you can go to Luke’s home again. Unless you’re Luke, because he’s a little borked up right now. But then again, so is Luke’s home. This rambling series of sentences must mean that it’s time for the sixth chapter in Michael Reads Percy Jackson: The Last Olympian, referred to by those in the know as…

So let’s jump right to the arguably biggest reveal in this chapter: The titular “last Olympian” is…Hestia! I really didn’t see that coming. I figured it would either be someone big, like Poseidon, or it might turn out to be Percy himself somehow. But, nope! The great thing is that it totally makes sense in the context of “last.” Last-ditch, last-reserve, last-…remembered? Hestia doesn’t ever get much focus in the original mythology. Perhaps she was more revered in every day ancient Greek life, but she never really got a lot of press. It’s fun to see her getting some of the spotlight now.

Honestly, I’d even forgotten about her a bit myself. In Zeus Is Dead, I didn’t do much with her, aside from making her a shy homebody who skips the gods’ press conference. On the other hand, I did have her fight briefly alongside Demeter in a certain climactic battle against— Well, spoilers. You’ll just have to read the book. </shill> 😉

“My first thought was: monster. When you’re a demigod and you find a sweet little girl alone in the woods— that’s typically a good time to draw your sword and attack.”

Honestly, that was my gut, too. Me? Untrusting and jaded? Naaah!

But can we talk about Ms. Castellan? Dang, that’s messed up, isn’t it? So, she had the same gift of seeing through the Mist that Rachel and Percy’s mom have (I forgot Percy’s mom could see stuff until the text reminded me), but then she tried to be helpful, looked into something, saw way too much, fried her brain, and now she’s kind of stuck in this personal mental hell-stasis endlessly baking cookies and pining for Luke’s return? Damn, that’s cold. (Also, hey, Hermes, help out your son’s mom just a little with that, will you?) It’s heartbreaking, and uncomfortable. I figure at least someone is looking out for her, since she doesn’t seem able to function on her own. Are we looking at Rachel’s future?

But what did Ms. Castellan see? Was she trying to be a new Oracle? Did she open the Necronomicon? Did she read a YouTube comments section?

Percy’s mom and Paul are surprisingly good-natured about having their living room wrecked by a giant hellhound. (Heck, MY dad wouldn’t even tolerate neighbor dogs setting paw in our YARD!) And speaking of heartbreaking mother elements, we get more here. How much does Percy’s mom know about what she just gave her blessing for?

Hey, speaking of which, how come Percy’s parents get to hear about Nico’s plan but he still hasn’t told ME yet?? 😀 I think I can almost guess at this point, however. With Ms. Castellan apparently needing to give her blessing to Luke or something similar, I’m thinking Percy’s going to let himself be possessed like Luke was by Kronos? Maybe? But possessed by whom? I’ve no idea.

I’ll leave you with a couple of quotes that caught my attention as I read:

“The front porch was infested with wind chimes.”

I just liked the word use here. “Infested.”

“The smell reminded me of my sixth grade locker— and that’s not a good thing.”

That’s all for now! I wanna know what Ms. Castallan looked at!