In terms of writing, I’m chipping away at the third novel in The New Aeneid Cycle, which is my cyberpunk series. It’s tentatively titled A Dragon at the Gate, and I hope to have it ready for publication by mid- to late-2015. I know people are eager to see how the series ends, especially after the final chapter of A Memory in the Black.

It’s been slow going, mostly due to my efforts in publicizing Zeus Is Dead and working with my publisher (Booktrope) to get A Shadow in the Flames (the first book of the series) ready for the re-publication under their label. Making sure I tie together all of the character and plot threads is proving a challenge, too. Still, it’s a fun challenge, and I’m really enjoying working with a few new characters, some of whom aren’t exactly human…

2) How does my work differ from others in its genre?

In terms of Zeus Is Dead, I don’t think there a heck of a lot of mythological murder mystery comedies out there, and every tweak I’ve made to the traditional Greek pantheon in the process of bringing them to life comes from my own little twisted place.

As for my sci-fi novels, strictly speaking, they can be classified as “cyberpunk,” but whereas traditional cyberpunk tends toward bleak, violent dystopias, my own take on it includes a belief in the underlying goodness of the average person, and a light at the end of the tunnel. A few readers have classified it as “cyberpunk with hope.” 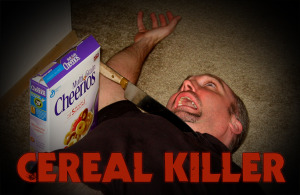 I live in the real world almost every day. When I write, I like to add other elements to that world that I don’t get to experience in real life. This naturally leads me to write fantasy, sci-fi, or the occasional tale of the supernatural. I’m fascinated by the intersection of our world with an imagined one, and I love the extra creative latitude that such genres give me in terms of the situations I can place characters into and the myriad of ways that allows me to look at the human condition from a new angle. Okay, okay, so I admit that sometimes it’s just a great source of humor, too. Heck, that’s the whole reason behind Zeus Is Dead…

I also just really love to imagine getting an emotional response out of a reader, be that a laugh, a gasp, or the desire to bludgeon me over the head with a book because a chapter just ended and they want to know what happens next but need to sleep. I can be a little sadistic like that.

4) How does my writing process work?

Lots of pre-planning. I brainstorm an idea that I can get excited enough about to want to spend an entire book’s worth of time writing, figure out roughly how I want the plot and characters to develop, flesh out the characters as much as I possibly can with details that may not even make it into the manuscript, do another outline, and THEN begin the actual writing…which is likely to kick over at least a few anthills from the outline so that the book still has a life of it’s own. And that was a long-ass, run-on sentence, there. Sorry ’bout that.

So that’s me, in a tiny nutshell. Or a part of me, at any rate. Okay, Tiffany, you can take the boot off of my car, now! (Seriously, now, come on, this isn’t funny…)

And now it’s time for me to pass the buck onto these two! *cue maniacal laughter*

Nikki McCormack is a rising author represented by the fabulous Emily Keyes of Foreword Literary. Wine and tea lover. Slave to her cats. She enjoys horseback riding, kayaking, caving, archery, gaming, dancing, good anime, etc. She is studying Japanese and practicing Iaido because she believes we should never stop learning.

Above all, Nikki loves to write. She lives to write. She writes mostly fantasy and science fiction. Her debut novel, THE GIRL AND THE CLOCKWORK CAT, a fast paced YA steampunk adventure that takes place in the streets of a re-envisioned 19th century London, was published on September 2nd, 2014 by Entangled Publishing.

When Camela Thompson was a little girl, she loved writing stories about animals doing amazing things. Ducks could speak with humans, and hamsters had a suspicious tendency to follow plot lines that were strikingly similar to Indiana Jones. She grew up, found a career, and got married, forgetting the need to tell stories. A week cooped up in her house with an illness resulted in a random decision to write a novel. That first novel will probably never see the light of day, but it woke something that had been dormant for years. She loves writing about women who shine in difficult circumstances.